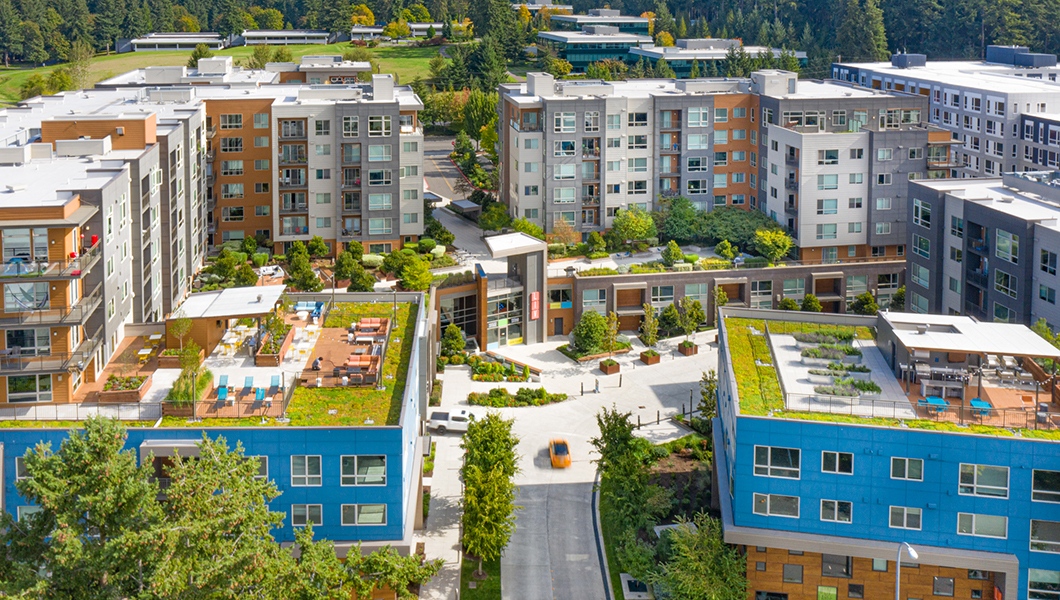 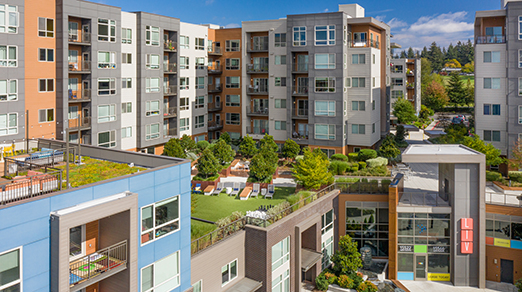 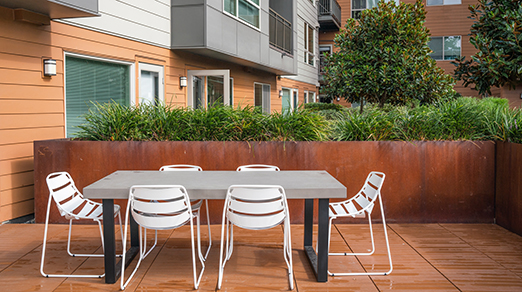 Built in 2016, the LIV apartments offer an elevated lifestyle in the urban environment of downtown Bellevue. The property is made up of four towers with amenities including rooftop decks with beautiful landscaping, large outdoor seating areas and bbqs, an indoor viewing room, gaming rooms, a gym, and even a room set up with dog washing stations. The building’s exteriors include a variety of sidings in a sleek, urban palette and the interior common areas are colorful and spacious. Unfortunately, it was discovered that three of the four apartment buildings had suffered significant settling issues which had caused damage to the internal structure of the building’s roof. Ownership acted quickly to correct the problem and Charter Construction was hired to make significant repairs to the three affected buildings.

The North building had sustained the most advanced settling issues so that building was addressed first. Charter staff designed and implemented a plan to shore and raise the building so that it would be level once again. Hydraulic shoring poles were used to incrementally raise the building back up to level. On the roof, the compromised structural elements had to be completely replaced, which meant that the 5th floor roof membrane had to be removed. Charter staff had to access the roof from both the roof deck above the damaged roof and the apartment level right below the roof to make the repairs. Giant tent-like enclosures were put in place over the flat roofs to allow the work to progress throughout the rainy fall and winter seasons. Once the first building had been repaired, the team moved on to complete the same repair sequence at the two other buildings. The second and third buildings were in better condition than the North building, but these buildings still had to be shored and raised and repairs had to be made to the structural components.

The extensive repairs required residents to vacate their apartments and clear them of furniture and belongings. Some of the residents were temporarily relocated and others chose to permanently move to other apartments within the ownership groups’ family of properties.

Construction at the LIV Apartments began in April of 2019. When the Covid-19 pandemic hit in the spring of 2020, Charter had to quickly devise comprehensive protocols that would ensure the safety of everyone involved - staff and residents. In order to keep this 14-month project on schedule and get residents back into their apartments as soon as possible, Charter worked with the City of Bellevue to keep the job site operational during lockdown and was able to prove that the project was essential, which resulted in completing the project on time.